The Galaxy S5 from last year was underwhelming and played a part in the manufacturer’s global market share slipping. Can the Galaxy S6 edge help to turn around its fortunes?

The Samsung Galaxy S5’s launch was troubled. Despite its display, processor and camera being some of the best at the time of release; the troublesome user interface and cheap, plastic build meant it wasn’t really the incredible device many hyped it up to be.

This individuality isn’t cheap. An entry level 64GB model will set you back by £760, which is expensive considering an iPhone 6+ with the same capacity costs just under £700.

Then there’s the regular Samsung Galaxy S6 that’s £100 cheaper. Besides from the size and design, there’s nothing setting the two devices apart.

Samsung veterans may be disappointed by the lack of MicroSD slot and removable battery, which have been taken away to make the device slimmer.

But if money isn’t an issue and you want a device that truly stands out, we’d definitely recommend the Samsung Galaxy S6 edge. Put simply, this is Samsung’s best looking phone yet.

It took us some time to adjust to the edge’s curved screen and we sometimes mistook the front for the back, but we were gradually won over. Whether you opt for a black, gold or green version; the curved screen, glass black and metal frame makes the phone look very upmarket.

The handset is sleek, slim and very easy for those with small hands to hold it. That compact size comes at an expense, however. The microSD slot has been removed and the battery is no longer removable. Samsung has also moved the infrared blaster and SIM tray to the top of the phone. The home button is noticeably sturdier than on previous Galaxy handsets.

You may find the handset a little uncomfortable to hold for long periods, however, as the metal edges have a lip that dig into your hands.

As you’d expect from a 16MP camera, the rear snapper produces some of the most clear and crisp photos we’ve ever seen. Landscape shots are full of detail, whilst interior photographs look noticeably better than the Samsung Galaxy S5. Some fantastic close-up shots also highlighted how impressive the S6 edge is at taking macro shots.

Both indoor and outdoor photographs were full of colour and detail, but we’d recommend switching off the flash as its strength often overtook our photos.

It’s not the best camera we’ve used – the HTC One M9 and Sony Xperia Z3 both have phenomenal 20.7MP cameras – but the impressive shutter speed more than makes up for the 4MP difference. Photos were taken instantly and we had no problem snapping fast-moving action shots.

The camera can be quickly activated by double clicking the home button, reducing any chance that you’ll miss the perfect photo opportunity. Optical Image Stabilisation has also been added and reduces blur by compensating for any jittery hand movements.

A decent camera placement means you’ll hardly ever find your fingers obscuring your shots. Both volume buttons can be used to take photographs, too – perfect for anyone with small hands who can’t quite reach the shutter button.

Very little clutter appears on screen when using the camera app and you’ll find a handful of useful modes including a setting for different photo filters. The many modes include Auto, Pro, Selective Focus, Panorama, Virtual Shot, Slow Motion and Fast Motion.

Stick the camera on Auto and it does a decent job of bringing out the vibrancy in photographs. Dedicated photographers will want to choose Pro if they want to adjust white balance, exposure and contrast settings. Selective Focus is a nifty setting that allows you to set your camera’s focus, be it a nearby subject, far-off landmark or an entire area.

Virtual Shot creates a 3D view of your subject. It does this by telling you to move your phone around the object and it stitches a series of images together. Once it’s done, simply tilt your phone from left to right to get the 3D effect. We had no trouble using this feature, but we see no real practical use for it either.

You can also shoot up to five minutes of 4K videos, with four times the detail of 1080p HD. The camera never struggled to adjust from light to dark areas in our filming tests.

The dual curved screen is unlike any you’ll find on another phone and it certainly makes the Samsung Galaxy S6 edge stand out from the crowd. It’s not all about looks, however, and the screen has the specs to match its unique design.

Viewing videos on the screen isn’t problematic, but parts of text running past the curved screen can be a little difficult to read. There was also noticeable glare on particularly sunny days too.

If you’re worried about dropping the phone and smashing the screen, Gorilla Glass 4 – which is also used on the phone’s back – should keep it protected to some extent. Gorilla Glass 4 is special glass that’s been tested and punished to withstand drops twice as high as other glass designs.

Audio is loud, clear and perfectly good for videos and conference calling. We noticed crackling when listening to music at higher volumes, so we’d recommend investing in a pair of good headphones. Samsung has positioned the speaker on the bottom of the edge, making it easy to muffle sound with  either your palm or fingers. It’s not as good as HTC One M9’s BoomSound speakers, but it’s noticeably better than the Samsung Galaxy S5’s.

It comes pre-loaded with themes, but these aren’t the most attractive and you can download better ones from the Google Play store. There’s also a briefing widget that gives a rolling feed of news. If you find this a bit bothersome, you can easily get rid of it.

Galaxy S5 users will know how troublesome its fingerprint scanner was. Samsung has listened to these problems and has added a massively improved fingerprint scanner to the S6 edge. Setting it up was easy and we could easily unlock it with one simple press. This was our preferred unlocking method out of all the methods offered by the Samsung Galaxy S6 edge. Just make sure your thumbs or fingers are dry, however, as the fingerprint scanner had problems recognising our prints when they had moisture on them.

The heart rate monitor isn’t new either, but like the fingerprint scanner, it has been improved. Its design is cleaner and provides detailed information on your heart rate, workouts and stress levels. It will even tell you to be more active when you’re having a particularly lazy day.

All the regular Samsung apps are here, including S Health, S Planner and S Voice. You can now disable these and take them off your app menu, but you can’t un-install them.

The interface looks distinctly Samsung and the lock screen allows easy access to the camera and dialling apps. Want more space for apps? There’s an option to change the grid from a 4×4 to 4×5. Once you press the left multi-task button, all your active apps will be displayed and you can disable them with a single touch or one by one.

Some serious power is packed beneath the Samsung Galaxy S6 edge’s attractive body. It has an Exynos processor that makes playing intense games and apps incredibly quick and smooth. We had no problems with overheating whilst testing out the phone.

Extra speed is provided by 3GB of RAM, making the Samsung Galaxy S6 edge one of the fastest phones we’ve used. The HTC One M9 uses a Snapdragon 810 processor and the S6 edge was noticeably more stable in comparison when playing processor-intense games.

There’s no microSD slot for external memory, but most should find that the 64GB and 128GB both offer plenty of storage space.

Battery life is decent for a phone this powerful, but it could be better. It did manage to last the entire day through regular gaming, social media, WhatsApp and mYouTube use. On more intense days where we went crazy with photography, Bluetooth, GPS, WhatsApp and gaming use; it didn’t even last us an entire day.

Turn power saver mode on and the phone can last for up to an impressive two days. It’s more impressive than the HTC One M9 which, despite having the bigger battery, lasts just as long as the Samsung Galaxy S6 edge.

There is no replaceable battery, but if you use the included fast-charger, you can get up to four-hours of life from just a 10-minute charge. The Samsung Galaxy S6 edge is also wireless charger compatible.

It’s hard not to be drawn to the Samsung Galaxy S6 edge’s unique design. The dual curved screen really makes it stand out from the competition, whilst the glass body and metal frame add to its premium design.

Looks aren’t the only good thing the Samsung Galaxy S6 edge has going for it, however. An incredibly fastprocessor will allow you to go through functions without any noticeable delay.

Its superb 16MP camera will ensure you can quickly take detailed and high-quality snaps with just a press of a button, whilst everything you view on the Quad HD display looks superb.

There are faults. The edge screen’s functions are limited and the curved screen can make reading it a little bit difficult. Battery life doesn’t last all day with intensive use and that metal frame can make the phone uncomfortable to hold. It’s also insanely expensive.

But those are only small flaws when you look at the phone’s overall positives. Yes, you’ll be paying a high premium, but you’ll be getting a unique device. This is an impressively and powerful phone with looks that make the HTC One M9 and iPhone 6 appear mundane in comparison.

One of the best looking phones Samsung has ever produced, but at an expensive price. The Samsung Galaxy S6 isn’t really that different performance-wise, so we’d recommend going for that option if you want to save money. If you don’t mind spending more cash, however, the Samsung Galaxy S6 edge is an ideal choice if you want a device that looks like no other. 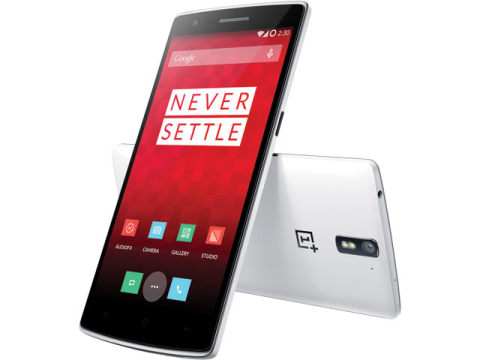 OnePlusOne = excitement
It’s a new entrant into the market and very little is known about it, but the start-up’s smartphone still fares well against more established competitors
Device Review - Paul Withers

Mystery Caller: S6, S6 edge and HTC One M9
With each new generation of handset comes a new flagship, this time the One M9 from HTC and the Samsung Galaxy S6 and S6 edge. Can the sales staff explain the differences between the new devices?
Device Review - Mobile News