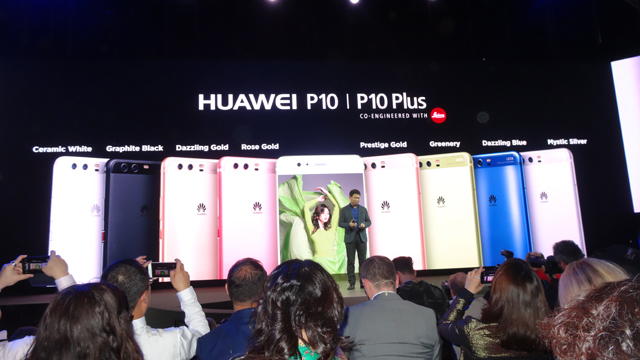 The Chinese manufacturer unveiled its latest P10 flagship in Barcelona on February 26 to a packed hall filled with more than a thousand people from around the world. It is the follow up to the hugely successful P9 flagship which was launched a year before in April.

Unveiling the new flagship smartphone, Huawei CEO Richard Yu claimed it was “an industry first”, making reference to it being the only smartphone on the market to have a rear and front lenses made by German camera specialist Leica.

It is now available in the UK,with prices starting from £649 for the standard P10 and £699 for the P10 Plus. The P9 was backed by a £10 million marketing campaign in the UK which featured Hollywood stars Henry Cavill and Scarlett Johansson. The handset was the first device from Huawei to be stocked by all four UK operators and major retailer Carphone Warehouse.

Available in a standard P10 and Plus variants, the latest device follows its predecessor in being stocked by the UK operator and retail partners. Huawei UK sales and marketing director Rhys Saunders claimed the trust built up with these partners can help the P10 surpass records set by the P9.

Speaking to Mobile News shortly after the P10 launch, he said: “The P9 was obviously one of our most successful devices and was the first to be stocked with all four UK operators and Carphone Warehouse.

“That really helped us establish a relationship with them and that’s been growing. We’ve seen that continue to grow and that will really help us push sales of the P10. I’m confident we’ll see it surpass what the P9 did last year. We’ll continue to build our relationships by having our staff go in and educate our partners about our products.”

Saunders also revealed Huawei is in talks with one other major UK B2B distributor, which he declined to name. If negotiations are successful, it would increase its B2B presence in the UK to two distributors, adding to its existing relationship with Exertis.

Huawei’s smartphone shipments surged 29 per cent year on- year in 2016 to 139 million units, despite the global rate rising by just 0.6 per cent. Sales revenue from these devices increased 42 per cent to £20.9 billion, largely driven by the success of the P9.

In an exclusive interview with Mobile News in December, Saunders claimed the manufacturer had “broken down barriers” and opened up new sales channels as it continues it quest to become the third biggest manufacturer in the UK before the end of 2017.

He also added that the smartphone’s popularity, driven by the partnership with Leica and the £10 million marketing campaign in the UK, had helped increase brand awareness and credibility in the market.

MWC 2017: LG claims to be ahead with new form factor
Future LG devices will be unveiled in the new form factor seen on the G6
Manufacturers - Manny Pham