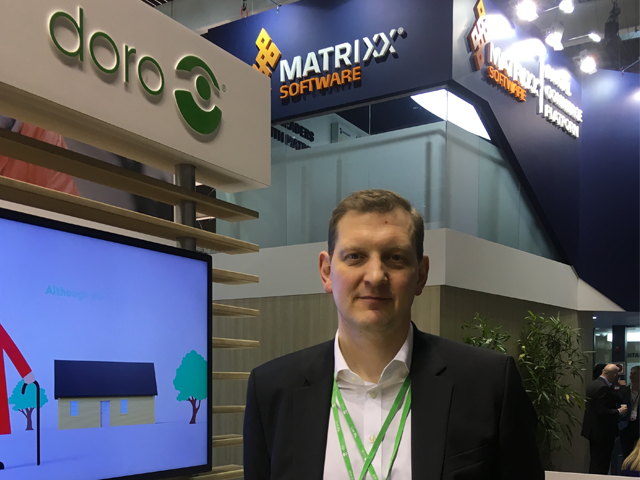 Doro says it has no competition in the over 65s handset market throughout the UK following its most successful year to date.

This was the claim made by the company’s UK and Ireland MD Chris Millington (pictured) after it unveiled a range of new devices at Mobile World Congress (MWC) on February 28.

Opening a strong market of over 65s to Doro’s growing list of partners throughout the years helped drive its success, according to Millington.

December last year saw it sign an agreement to stock devices with Three, marking the first time Doro products have been available with all four UK operators.

It brought the number of partnerships in the UK to 12, with others including Carphone Warehouse, John Lewis, Curry’s PC World, MVNO Anywhere SIM, ASDA and Argos.

B2B distribution partners include Brightstar, Exertis and Data Select. The figures for its current financial year are due out at the end of April. However, the whole of last year saw it achieve sales of £178 million worldwide, with the UK contributing £43 million.

Although shipments were not revealed in the latest numbers, Doro sold more than 750,000 products in its 2015 financial year. Millington declined to be drawn on figures for the final three months, but did reveal UK revenues were up 15 per cent and shipment volumes increased by five per cent.

Quoting IDC figures, Millington added Doro is currently behind leader Alcatel for feature phones throughout the UK and Europe. He claimed the company last year grew at a pace it didn’t expect.

“We’ve opened up a new market of over 65s to our partners. We signed with Three at the end of 2016 and the last few years has seen us develop some seriously long lasting relationships with our existing retailers and distributors.

“Our expertise and experience in our market segment has really helped our partners benefit from what is a strong demographic. That has been one of the main keys to our most successful year to date.”

Care services, in addition to the growth of its accessories arm and a big B2B push would help continue Doro’s momentum, added Millington. Doro last year sold more than 10,000 accessories worldwide, with phone cases being its strongest seller.

Doro is currently in talks with a number of as yet unnamed independent retailers to stock its accessories in the UK.

Although he declined to reveal names, Millington confirmed they are some of the biggest stockists in the country. He also revealed the company is working on a B2B product designed for lone workers which could be released over the coming months.

“This year I expect us to grow with the same momentum as the last one,” he explained. “I want to really push our new care services throughout the UK whilst driving our accessories arm, which we haven’t really done previously.

“I can’t really reveal much about B2B yet, but it’s something that will be a big focus for us as well this year. We’re working on a lone worker solution which will be released very soon.”